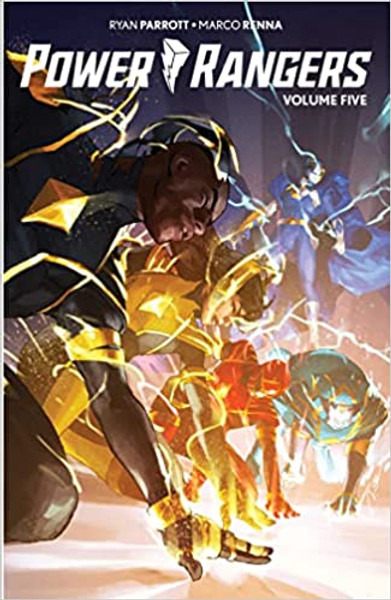 In the aftermath of the Eltarian War, the Omega Rangers take on their most ambitious mission yet!

With the threat of the Empyreals defeated and Earth saved, the Omega Rangers must forge a new path for themselves! Massive galaxies, countless planets, and more than just humans in need of heroes inspires the Omegas to make a bold proclamation – they’ll go wherever they are needed and be heroes for the entire universe. Immediately separate distress calls from two distant planets force the team to split up. Zack and Trini soon learn that even the battles you win have costs, while Jason and Yale come face-to-face with a fan-favorite character on a mission of revenge! ! But protecting the galaxy means Safehaven is left unguarded and when an ancient containment canister is stolen, it may spell doom for the Omega Rangers… Superstar writer Ryan Parrott (Mighty Morphin Power Rangers/Teenage Mutant Ninja Turtles) and fan favorite artist Marco Renna (Mighty Morphin) forge a bold new path for the Omega Rangers in the wake of the Eltarian War. Collects Power Rangers #17-20.

Something is Killing the Children Vol. 5